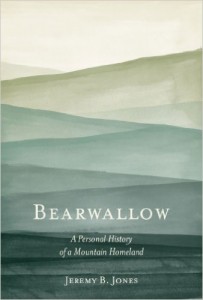 Like many young people in these mountains today, Jeremy Jones left his family home and land at the foot of Bearwallow Mountain in Edneyville, fifteen miles from Hendersonville, NC to attend college. Afterwards he taught English to children of the village of Gracias a Dios in the mountains of Honduras. At age twenty-four, he, like many “third-generation immigrants” who return to their roots in search of who they are, returned to his former Edneyville grammar school to teach English to Mexican and Central American immigrant children. In Bearwallow, Jones recounts in vivid language and stories his discoveries during his year of looking “at what the region used to be—the customs, the words, the music of the motherland” and the “remade wilderness” that replaced it. It is rich in song, memory, scenes of wild forests and wide land, birdsong, the smell of campfires, amusement, wonder, and people who choose to adapt, resist, accept, and question in their own ways.

I enjoyed the book and loved the way he told me mountain history through stories of ordinary people who became alive and enjoyably complex and human to me. The most startling thing I learned was that these “isolated” mountains have never been as still as I have been told.

He asked me to contemplate the changing mountain people, scenery and land use, and work, along with the new meanings of “community” and “development.” He raises questions about the role of a good teacher, consequences of social change, which doesn’t empower and isn’t “locally led,” what is lost or gained when “land,…no longer for sustenance;… grows houses.” Why does not being a laborer dependent on apple trees and no longer being “stewards of the land” make one better? Why do young people need to forget perfectly good words such as “reckon” and “gully-washer” when they leave from the mountains? And why must they have a “constant battle between escaping and settling?

He asks a crucial question for mountain- and city-dwellers alike: “Is there still a purpose for the rural without the need for a market?” His memories, research, stories and reflections provide much material for pondering the heart-felt, memory- and story-filled, sacred, and knowledge “value” of the rural and the future of these mountains in a world which increasingly preserves only that which can be sold for a price.

Reviewer: Carol Clark is also an immigrant in her own country. She moved to Yancey County fifteen years ago from Greensboro, NC, where she taught economics at Guilford College. She spent her childhood in the woods in a small town, which also no longer exists, north of Chicago, lived for nearly four years in Guatemala and spent a total of three years in Mexico.